Last night I got home and saw a slim Fedex envelope. What could it be? Yes! It was my season tickets to the Los Angeles Xtreme XFL team. While I'm not convinced the XFL will overtake the NFL anytime soon, it seems like a good idea to pick up some tickets to the opening season to the only football team in LA. I had never seen season tickets before, they look cool. Click here to see them.

I went to dinner last night with my college roommate, Brian. We went to a nice restaurant and ate well. Unfortunately, I'm paying for it today. I don't normally eat such rich food. 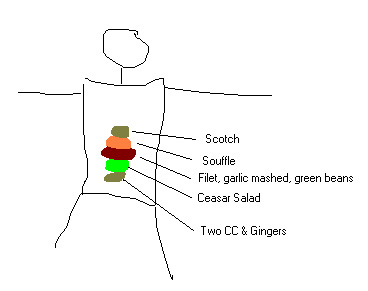 Diagram of my gut contents

Now I'm sitting at work with a huge ball of food in my gut, feeling like a bloated warthog. Perhaps some coffee will kick my digestion into gear.

Argh. The pleasure, the pain, the belly...
Posted by michael at 09:55 AM
Car Audio in style

Last night after I put the sleepy girls to bed (that includes the wife) I cracked open the Aiwa CDC-MP3 radio I got for Christmas. I got out the adapter kit I picked up on the way home. After following the simple instructions, and running back and forth from the car to house a dozen times with various tools, the new radio was working.

Now, mere mortals, I can drive while listen to MP3 files directly of a CDR I have burned myself! Muah-ha-ha-ha! We are talking about over 13 hours of finger-snapping, ass-twitching music on each CD!

Anyone willing to rip my entire collection of CDs to MP3s will be granted the privledge of touching the All-mighty CDC-MP3.

Posted by michael at 05:20 PM
Checks at the supermarket?

Why are people still writing checks at the supermarket?

C'mon folks, every bank offers check cards and every supermarket has the ability to use them. Yet I always see people writing checks to pay for groceries. What is wrong with people?

Tonight I'm at the grocery and the woman in front of me writes a check for her groceries. The clerk goes through the whole check rigamarole and hands her the receipt. Then she says she forgot to buy a bundle of firewood. The clerk rings it up and she writes ANOTHER check for FOUR DOLLARS. I thought my brain would explode.

Heaven helps us. As Henry Rollins would say, "They're stealing my life, a minute at a time."

I try to stop by Dioxidized to see what's up with Gen Y slacker Lucas and hope that there are more nice pictures of women rather than pictures of dead people. But Lucas is back in the working force and hasn't updated since SUNDAY, so I will make the post he would have made.

I realized I forgot to bring a belt and my watch, so now I'm late for everything and keep having to hitch my pants up.  Fuck.  Now I need hit a department store to buy a belt.

I was reading about MacWorld and the rabid fanatics there. I have pondered before this question. Now you can read my conclusion.

Is Apple a cult?

Every cult can be defined as a group having all of the following five characteristics:

1. It uses psychological coercion to recruit, indoctrinate and retain its members
2. It forms an elitist totalitarian society
3. Its founder leader is self-appointed, dogmatic, messianic, not accountable and has charisma
4. It believes 'the end justifies the means' in order to solicit funds, recruit people
5. Its wealth does not benefit its members or society


Let's run through the numbers shall we?

You all must visit Zombo.com. You must leave you browser here for hours at a time. Go now.

Of course, this is the proper way to best enjoy Zombo.com.

I have a linux box in my office at work. I run a little web server on it. Why? Why not! I've got enough juice that the IS guys let me do most of what I want. Well the box was up for like 75 days nice and sweet. I was trying to swap around the LAN cabling and the to check if it was working I launch Netscape. I tell you the box DID NOT like that. I sat for a bit letting it cogitate. After sitting for a few minutes, the X server went down and I was back to a command line. OK, X just crashed, I'll be fine. As I was typing 'top' to see if Netscape was still running, the box keeled over and went to black screen. No, ctl-alt-del did not bring me back to the command line. It was dead. I power cycled and everything was fine.

Here's another kicking web site for all you net music lovers: friskit.com

Good news for Generation Y/Nintendo, Lucas over at Dioxidized finally got a job. I expect a wife, kids and mortgage in short order. Be careful linking there, no dead people photos currently, but they could appear at any minute.

Quake 3: Team Arena is suh-weet. I love the Overlord and Harvester mods. I've been staying up way to late playing it.

In Ultima I'm about to get my 3 year awards. Hard to imagine I've been playing a game for 3 years. Geez. It boggles the mind.

I'm on a flight from Cincinnati to LA. As I got on the flight I noticed a number of people sniffling, obviously sick. As I sat down, I thought, "Damn, I'm lucky to have avoided getting sick over the holidays."

To my right there was a woman who was fidgeting quite a bit. She kept messing with books and her bags. I didn't think much of it.

After a while I started to feel bad. I got a headache and my throat started to close up. I feared I was getting sick. I drank tons of water and tried to rest. I couldn't believe that after I left the cold weather I was catching a cold.

The plane landed and I got ready to leave. I heard the fidgety woman start to murmur what sounded like baby talk. Than I heard a distinct 'Me-ow'. I turned to look and saw that she had cat in her carry-on bag. A cat! I am terribly allergic to cats. This woman had assualted me with her biological weapon, the cat.

What happened to putting pets in the hold? America is on the decline.

Posted by michael at 05:46 PM
Weblogs and depression

I'm been on vacation visiting the inlaws since Christmas. Without my l33t gaming box, I am unable to enjoy nightly doses of online gaming to sate my need for carnage. I end up surfing the web endlessly, link upon link. Once you get on a weblog path, it inevitably leads to more weblogs. I started to notice a trend among some the weblogs. They are all depressed. Entry after entry of "I'm bored" or "My life sucks". Is life out there really so bad. When I visited some college guys in my fraternity for alumni weekend a few months ago, they seemed to be happy.

Perhaps its all the smoking that Generation Y does. Seems like all the 20 somethings around all love to suck on some good old tobbaco. Perhaps Philip Morris could lace the cigarettes with Prozac. Instant happiness!

Oh yes, Happy New Year. Michele and I went to vist my brother Matt and his wife Jessica in Washington, D.C. We had a great time. Matt and I watched TV and played PSX2 and the wives shopped. For New Year's Eve, we went out to dinner and a cool blues bar. The wives drank a bit much. Of course, we men had no problem, but the next morning, the girls were a bit hung over. Poor Michele got sicker and sicker. She threw up on in the airport in DC, in the airport in Philadelphia, on the plane, in the airport in Cincinnati, in the car on the way form the airport, and in the house once we arrived. That's some world class puking if you ask me. I'm damn proud of my wife!