For those keeping track, I was up to 2:30AM working on Michele's computer. It was worth it though. The next day she was *ecstatic* about using Windows XP.

Yesterday I got involved in city politics. Here in South Pasadena, they big news is the desire of the school board to propose a $29 million bond to pay for a bunch of work on the Middle School. Michele and I talked about it and I decided to go to the school board meeting. As Michele says, I can 'talk that bullshit' with the best of them.

I headed out to the meeting. I walked into the city chambers and the Council just went into session. The first thing on the agenda was the public speaking where anyone could get in front of the council and talk for a minute. I was the youngest person in the room. One older person after another got up to the mic and blasted the council for the proposed traffic changes in town. I wondered when they were getting to the school bond issue. After about ten speakers, the city council was visibily tired of being called nincompoops. One guy got up and complained that the council hadn't put the meeting notice in the local paper. Angry senior citizens nodded their heads in agreement. Hrrm, I read about the meeting in the paper in the morning. The woman next to me leaned over and said, "If it wasn't for the school board meeting, there'd be more people here." Huh? I asked here if the council was going to talk about hte school bond. "Heaven's no," she said, "the school board meeting is somewhere else. This is just about the horrid traffic plan!" Damn. I walked out of the chamber. As I did, several in the audience stared at me. Perhaps they thought it was my protest gesture against the traffic plan.

After a short walk, I entered the school board meeting. There were 4 others in the audience watching the school board (6 people). As I sat down and flipped open the info packet, the chairmen said, "Well, that about wraps it up, are we ready to vote?" Damn. After a bit of parlimentary stuff they voted to place it on the ballot. Meeting adjorned.

Michele has continued to update her weblog. It take my utmost self control to not edit her entry and put in paragraphs. She was inpressed with the lifewithageek page and hopefully she can emulate a bit of the text formatting there before I am driven to drink.

It appears that Brad has been bitten by the weblog bug and has a case of weblogitis. [mrburnsvoice] Excellent [/mrburnsvoice]. He's on a cruise ship vacation, yet finds a way to update his weblog.

My other two progeny weblogs, Pat and Mike, continue to post but do not seem to be as obsessed as Brad.

The new hardware for Michels' computer showed up and I need to find time for the motherboardectomy. I splurged $20 on myself and got one of those cool front panel connection extension. 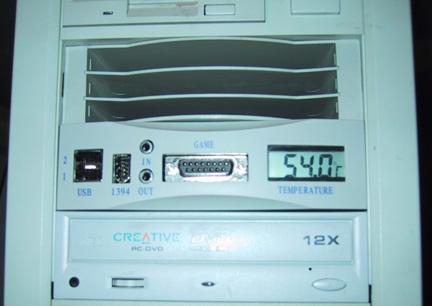 Cool, eh? Yes, I know it's geeky but I don't care. That's the CPU temperature measured directly off the heatsink. Woot!

One last thing, Matt updated Crookdimwit with a new top banner. It's neat, but I thought the Crookdimwit color was light blue not red. Posted by michael at August 02, 2002 07:55 AM