It's been a busy couple days.

So around 11AM is hopped on the bus, rode it to downtown where I switched to another bus headed toward the airport. I brought a couple books along to read. I am now firmly convinced that everyone has a mobile phone. There were more people talking on phones on the bus than weren't. A guy mentioned that on holidays & weekends calls are free. People are smart and took advantage of this.

The bus arrived at the transit center near LAX around 1:15. The transit center is really just the place at the Lot C parking lot where lots of buses drop off and pick up. I walked onto the shuttle bus and took a seat. One of the guys ont he shuttle works security and had a radio in his ear. Out of the blue he says, "They are gunna shutdown the airport, someone got shot." People a bit concerned. He then tells us that the shooter is dead and they don't know what they are going to do at the airport.

At this point, everyone that wasn't on a mobile phone now whips one out and begins dialing. Everyone's calling someone. I don't really have anyone to call. The radio energy inside the bus cooked have cooked a potato.

The bus driving announces that she, "ain't going in there till it's safe!" General freakout ensues. "I'm going to miss my plane!" I calmly walk off the bus and start walking. In about five minutes I'm inside the airport. I ask a police officer if they are going to shut down the airport. His radio is squawking constantly. He says, "They don't know what the fuck they are going to do..."

I keep walking in toward the Delta terminal. Just as I'm about to get there, the police start pushing everyone back. Soon, the Bomb Squad rolls up with the Fire Department soon afterwards. Lots of police everywhere. All traffic in the airport stops. It gets very quiet, except for people talking on mobile phones, of course. 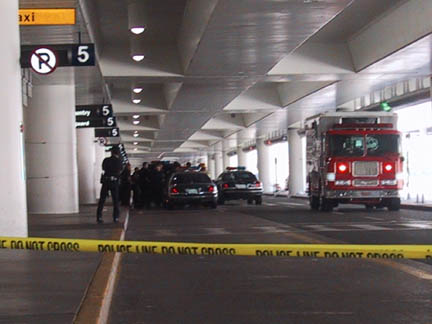 That was the scene from my vantage point.

At this point it's about 45 minutes until Michele & the Girls are supposed to land. A few minutes earlier, my parents called. They had heard about the shooting on the news and were concerned. I told them everything was fine.

I decided to grab a snack before all the food ran out. I got a cup of coffee and a croissant. Bastards were out of the ham and cheese ones and I had to settle for a plain one. I sat down on the curb and ate while the rumors flew around me.

After that I called Delta to find out what gate Michele would arrive at considering that the Delta terminal was closed. It took them about 5 minutes to tell me they weren't sure. Weren't sure? WTF?

Finally, Michele called me. They had landed and were still on the plane. She wasn't sure where they would exit. I made my best guess as to which exit Delta would use. About 10 minutes later they were heading out, I saw them, and there was much hugging.

Cars were beginning to circulate the airport. They must have opened up the traffic. I called for the Town Car and they said they were on the way, but the traffic was bad. It took about 45 minutes for the guy to make it to us. A long 45 minutes with children ready to go home...

Thankfully, we arrived home safe and sound. The house is now full of girls and their debris.