I was getting ready for work this morning and noticed this sight. 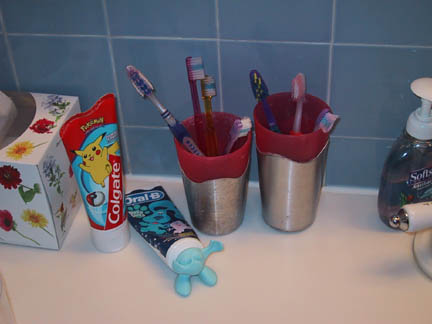 Let's see here, there are four people in the house. My toothbrush is the one on the left. The rest are for the girls. Between Michele, Zoe, and Mira, they have SIX toothbrushes.

It is quite confusing to me since they seem to all use each others. I've looked for a pattern, but there is none. Pure girl confusion.

Ever since I began living with Michele, I've had to deal with sharing the bathroom space with her. I have a small shelf under the showerhead for my soap & razor. The rest of the space is filled with various lotions and potions she uses.

The countertop sees regular incursions of 'her stuff' onto my side. I agressively rearrange the countertop to regain my lost territory. For eight years of marriage, I have fought this battle with general success.

Here's why this concerns me. Instead of facing one woman, I am now facing three. At first I thought it was triple the amount of stuff I would be dealing with, but now I see my foolishness.

The photo above shows the potential assualt these wily women are planning. I have 1 toothbrush, they have 6. This tells me to expect not a tripling of 'girl stuff' but truly an astounding SEXTUPLING (six times) of the amount I currently deal with.

Basically, I am doomed. Unless I build a secret bathroom for my own personal use, I risk being enveloped in a pit of creams, lotions, and strange plucking tools. Posted by michael at June 07, 2002 05:16 PM