All I wanted was a simple screen capture of a scene of a DVD I have. I thought that every DVD player in a PC would have a screen capture built in. Not so young grasshopper.

I tried WinDVD & PowerDVD with no luck. I spent 3 hours Sunday night trying to get a capture. I searched and read tons on the net with no success. I had someone at work try with a new Apple Gwhatever Mac with the new spanking DVD drives. No luck.

Aaron at the office did get a screen capture with the WinDVD version supplied with the new Dell computers. I tried upgrading at home to it, no dice. "This computer is not a verfied Dell computer" appeared on my screen as the setup ran. Fuck you Dell.

So I delved deeper into the haxx0r depths and found DVD Genie. This sweet piece of software 'fixes' various DVD player software and enables more functionality. In my case, it turned the screen capture feature on in my version of WinDVD. 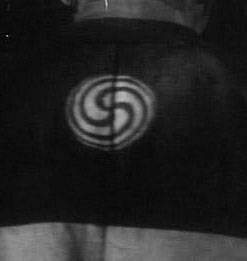