Cruftbox
My box of cruft
A comment on the attacks

I just watched an amazing comment on the attacks on America. His comments are the truest I have heard.

Go watch Jon Stewart as he spoke upon returning to the air.

It's a big file, but well worth it.

Posted by michael at 09:08 PM
The Attack

I still feel quite numb over the attacks on the World Trade Center and Pentagon. I try to force myself to wrap my mind around the enormity of the tragedy, but it seems impossible.

My brother & wife live in DC. I have lots of friends in NYC. Hell, I was in New York last week. Thankfully they are all safe.

I don't have anything much write that hasn't been covered elsewhere. My brother has written a good account of his experiences.

Whiel I would like to strike back against the enemy THEM, all I can really do is fly the American flag in front of my house as a symbol that America endures even through this crisis.

So I go back to work and move forward. If I stop and become afraid, then the terrorists have won.

Posted by michael at 10:14 AM
Fight Censorship

I'm a firm believer on putting my money where my mouth is.

I don't much like censorship of books.  I especially don't like censorship of books that teenagers like because some adults are uncomfortable with the ideas presented.  I recently read an article on plastic (actually the original charleston.net article) about a guy that wanted Catcher in the Rye removed from the high school library because it was a "a filthy, filthy book".

Mr. Scared of Teenagers is on the school board and tried to ban the book.  He was voted down 6-1 and the book remained on the shelves. That would not stop him.  It seems Mr. Closed Mind checked out the copies of Catcher in the Rye from the high school library and now plans to keep them, in a ridiculous plan to stop teenagers from reading this novel.

Now, I'm not saying you need to like the book.  Conservative blowhards like George Will don't like it either.  But at least he isn't calling for it to be banned.

I thought to myself, "Self, that is a load of crap.  Someone should do something."

Thanks to the wonders of the internet, I have the ability to reach out an affect things from a great distance.  I sent four copies of Catcher in the Rye to the high school in the story to replace those taken by Mr. Filthy Filthy.  It's simple, it's easy, and YOU should do it right now.  Send a message, do something real rather simply thinking in your head that censorship is wrong.

Most everyone reading this site has some money.  You all certainly have $10.  In fact some of you have plenty of money to spend on something like this.  That's all it takes to send a message.

Go to Amazon.com and ship a copy of Catcher in the Rye to one of the high schools affected by Mr. Censor Jackass.  You can send a paperback or a hardcover, it's up to you, but DO IT NOW.

Don't be one of those people that sits at their computers and just thinks they should do something.  DO SOMETHING NOW.

Send the books as a gift to the following high schools:

I'm off to New York for a few days tommorrow. Who knows? Maybe I'll have time to update on the road.

Until then, I will leave you with this fine dinner I had on Saturday. 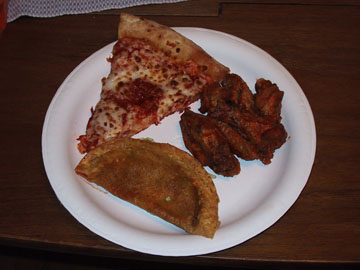 Pizza, buffalo wings, and a taco. What more can a man ask for?

While I'm away, here's some MLP:
geeklab.net, bbspot, FrontX, and Plycon.
Posted by michael at 11:59 PM
Arrival

The AOL CDs I sent to nomoreaolcds.com have arrived. 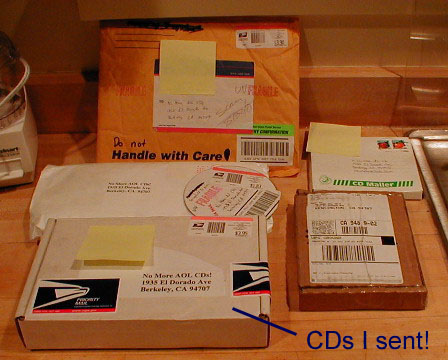 Woot! Group efforts like this give me pleasure in my hindbrain as I fufill my instinct for tribal activities....