Cruftbox
My box of cruft
No more AOL CDs

Tired of seeing AOL CDs everywhere? I am.

Well, some guys up in Berkeley are trying to do something about it. They've started nomoreaolcds.com. They intend to gather a million CDs and dump them into AOL's parking lot in protest. 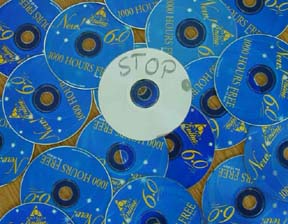 I suggest you do the same! Get off your lazy ass, and go mail these guys some CDs. NOW!
Posted by michael at 07:53 AM
Burger King Tacos

Is there anything more wonderful than a fast food place to begin selling tacos?

No, it is the most wonderful thing.
Posted by michael at 09:34 AM
Jerky Recipe

I found the recipe at the office.

Mix the marinade to dissolve the sugar and other seasonings.

I have made the jerky from beef and turkey. You could use other meat, but I haven't tried. Cut the meat in strips WITH the grain. The strips should be less than 1/4 inch thick.

Soak the meat in the marinade overnight. Put the meat in the oven or dehydrator and set the temperature to 180 or so. It might take 10 hours to get the right consistency. Your preference will determine how dry you want the jerky. Red meats contain a good amount of fat, so they remain soft, even when a significant amount of water is gone.

Back on my birthday, I got a slew of new books. I finished a few.

I read a good book called Crypto by Steven Levy. It the story of how encryption became available to the general public against the wishes of the NSA. It's an amazing story to read. Without these individuals, we wouldn't have the secure web connections routinely in use today. It doesn't tell you how to use or make crypto. For that, you need Applied Cryptography by Bruce Schneier.

I also read Candle by John Barnes. The book takes place in world exposed in Kaleidoscope Century earlier. The concept of 'memes', a type of program that runs in your brain, is explored. The basic concept is that eveyone on earth has the same meme running after a long 'War of the memes' for control of people's minds. Is it better to be happy and a productive member of society at all times, or is free will more important? Candle is not as dark and shocking as Kaleidoscope Century, and doesn't make you guess as much about the lingo used. I remember reading Kaleidoscope Century and wondering what a 'werp' was for a while (it's a computer/PDA, btw).

On a completely different note, I made jerky. I will post the recipe when I find it. I thought it was on my desk, but it's not...

Until, you get the Link of the Day.