One more day until my wife returns from her 12 Quilting Expedition to Kentucky. I cannot wait... I am a man who needs his wife.

This morning I awoke and got ready for work. The girls were sleepy because of the birthday party and trip to Santa Barbara yesterday. Around 8AM the biggest awoke and wandered up front. She asked for breakfast. She said she wanted cereal. I asked if Cheerios was OK. The mature 5 year old informed me that Cheerios is for 'babies' and that she wanted Alpha Bets.

I headed into the kitchen and saw water on the floor. A lot of water. The sink that the washer empties into had been plugged by a stray sock. I headed to my bedroom, stripped out of my work clothes and into my shorts. I returned to the kitchen to battle the water and drive it outside. The 5 year old said, "Daddy, I'm thinking that I want to play in the water." I sent her to the living room. Kids these days. Cheerios no good? Soapy laundry water fun to play in?

In other news part of geeklab.net is up. It's run by Ellis, formerly of GeekNews. Check it out and stuff.

I wrote another Ultima story. If you don't play UO I doubt it'll make sense.

While much has happened, I am not telling you lowly dogs anything.

I put in a new stat icon on the bottom of the page. Mycomputer wanted $60/year for stats. No thanks. Long live hitbox.com!

It's your MORAL DUTY to buy this. If we want games to run under linux, we must buy them! For $15 everyone can afford it.

Posted by michael at 07:21 AM
I'm about to make your life better

Wasn't that cool? It's like Yahoo, but you get to drive with your voice instead of a keyboard.

You can check out the web site at tellme.com.

I was going through some paper work when I saw this old receipt: 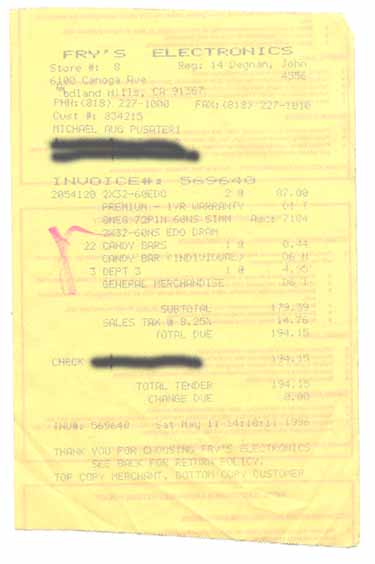 If we do the math and extrapolate the RAM cost per Meg out 5 more years, we see that RAM will cost $0.0025 per Meg.

I figure that people are willing to spend about $50 on RAM for their computer. R33t hardware dewds (like me) willspend much more, but the average person will spend $50.

Posted by michael at 07:22 AM
Linux roxxors Windows for Plug'n'Play

I installed a new sound card I bought off ebay for $8 today.

In windows I had to d/l the drivers and run the install program.

In linux, the OS did it all during the boot process`.

I was running some errands at lunch today and stopped by a McDonalds to grab a quick bite. I usually get the chicken sandwich, but today I tried something different.

I have heard the ads for the new Mighty Wings at McDonalds. I love good, hot Buffalo wings, so I was intrigued. I ordered a ten pack and hoped for the best.

I got back to my desk and opened the little box of wings. I was suprised to see no sauce on the wings. "How could they be spicy without sauce?", I thought. I took a long drag on my orange soda and chose a wing.

It was nasty. It was worse than nasty, it was horrid. They just took raw wings and fried them. There was no flavor. The outside was dry and crispy and the inside was full of fryer oil. The taste was what you might expect if you fried chicken in french fry oil. On top of the lousy taste, there we no drumsticks. As any Buffalo wing afficinado knows, the drumsticks are much better than the two bone forewing section.

So, stay away from McDonald's Mighty Wings. In fact, stay way in general, Carl's Jr. is much better.

Posted by michael at 05:32 PM
Another kooky email

I received this today:

i have visited your site and have found it very interesting. The reason why i have become interested into your company is because i want to or need to know more about your products. I myself am a vegetarian and do not drink alcohol. I was looking into differnt products similar to yours which were not suitable for vegetarias. I was hoping you would send me information on all your products, which are suitable for vegetarians and are also alcohol free, i hope to hear from you soon Thankyou

Someone please explain to me what product I am selling?

This has got to be some weird email address spider that is looking for replies to confirm active addresses.