Cruftbox
My box of cruft
A lunchtime spotting

I was returning from a fabulous lunch at Subway yesterday with two of my co-workers. We were chatting about some subject as we usually do. Up ahead of us was a young woman in a short yellow dress, getting into a car.

Being men, we were watching her. She opened the rear passenger door and bent over to pick up something inside the car. The short dress slid up and revealed that she was wearing no underwear. We saw everything. My co-worker stopped talking for a second and after a moment said, "She's not wearing underwear." I summoned my power of concentration and uttered, "Yes."

We slowed passed and all conversation ceased for a bit while our minds cleared from the nudity induced haze.

I received the following email this weekend:

I KNOW A PERSON THAT IS INTERESTED IN SUMITING A JINGLE ABOUT THE DR PEPPER SODAS THAT WOULD BE GOOD FOR YOUR ADVERTIZIND PROGROM. HER CONCERN IS HOW AND WHO CAN SHE SUMIT HER JINGLE TOO. CAN YOU DIRECT ME.

Now am I missing something? Where does my small and stale page about Dr. Pepper imposters lead anyone to think I'm able to approve advertising for Dr. Pepper? What's with the ALL CAPS? What's with the lack of spelling or punctuation?

If I were a Dr. Pepper advertising exec, I doubt that this email woudl drive me to action. What are people thinking out there? I am tempted to write Arlett60@aol.com back and ask, but I fear the response.

I just enabled searching the archives of Cruft.

Yes, I actually attended my first XFL game. I had a great time.

No, it wasn't the greatest football game of all time, but it was MY TEAM out there. For once, I had a sense of belonging while watching a sports team. Of the many sports out there, I enjoy baseball and football. I can appreciate an occasional game of basketball or hockey. I'll even watch rugby, soccer, or luberjacking of ESPN if it is interesting. But I'm kinda partial to baseball and football.

I went to a small engineering college in upstate New York. Rensselaer Polytechnic Institute was the first engineering college in the country and is one of America's top 50 universities. However, you will never hear the RPI Engineers mentioned on ESPN highlights. Yes, the hockey team is Division 1, but the rest of the sports are Division 3. As a result, I have no college team to root for that I truly call my own.

In professional sports I am similarly screwed. In Los Angeles, my beloved Dodgers are owned by the anti-christ himself, Rupert Murdoch. He's not even an American! His management team has driven the team so full of talent into the ground at light speed.

Los Angeles has no NFL team. The fine city council is so caught up on paying back their big money donors that they can't agree on who should get the rights to even approach the NFL about a team. Morons.

Lakers, Kings, yah yah yah. Well, I dig me some Shaq, he got the kinda style I like, but without my beloved Dennis Rodman, it's fairly dull. When the Lakers are in the championship series, I'll tune in like any good bandwagon fan, but I still won't know the players... Nope, Lakers and Kings aren't really my teams.

So along come the Los Angeles Xtreme of the XFL. They are my team. Their quaterback, Tommy Maddox, went to UCLA. They play in the Coliseum. They have hottie cheerleaders. And best of all, they are top of their division and headed for "The Big Game at the End" for a chance at the $1,000,000 bonus.

They even have a sense of humor. Even my lunkhead brother knows of "He Hate Me", the phrase emblazoned on the jersy of Vegas Outlaw running back, Rod Smart. For Saturday's game, a LA player had his jersey reworked to "We Hate He". The crowd loved it and we chanted it over and over. When was the last time the prima donna athletes of the NFL showed an ounce of wit or humor? I think Tagliabue has specifically disallowed humor in the antiseptic NFL.

So I'm happy. I went, I drank beers, I at peanuts and tacos (we're in LA for chris'sakes), I oogled the cheerleaders, and cheered for my winning team.

Unfortunately, I won't be at the next game. Yep, I'll attend 1 of 5 games this season. It seems my wife has arranged for us to fly to Cincinnati during the same weekend as the Xtreme's last game. My lunkhead brother is laughing outloud at this point, but I don't care. There's still the playoffs baby!

Posted by michael at 09:14 AM
Someone please explain...

I, unlike many of you Gen Y types, read two newspapers every morning. In this morning's paper, deep inside, I found this item: 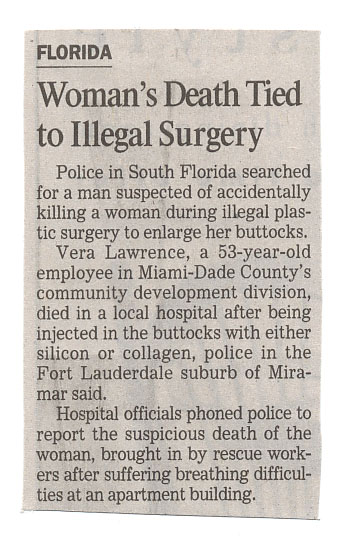 While I am sorry about Ms. Lawrence's death, this still baffles me.

Why was she paying someone to ENLARGE her buttocks? I have never heard of such a thing. Wouldn't a steady diet of donuts and Coca-Cola have the same effect?

Someone please explain this to me, I'm completely at a loss.
Posted by michael at 08:07 AM
Links for you to click

For some reason I was wandering on MP3.com Don't ask why. While I was surfing, the internet wave pushed be there.

I looked into spoken word and saw a guy named angry genius boy and his rant about Why Macintosh Users Are Dumb. I luaghed and then I laughed some more. Mockery of this sort is tasty and addicting.

I looked around the page and saw a link to Why angry genius boy is dumb by three guys called Barrel o' Monkeys . Now, the only thing better than mockery is mockery of mockery. Go listen to the first link, then go listen to the second link. Do it now. Don't worry, you have this site bookmarked...

Done? OK, good. Now that's some good shit eh? Now go listen to all the Barrel of Monkeys stuff and help push their MP3 earnings over the mystical $50 mark.

Since so few people read this site, I'll charge a few people by name to go listen. Joe, James, Lucas, Matt, I'm talking to you no-kid-having slackers with plenty of spare time types.

I missed the XFL game. AGAIN!

I've listening to a band called Ween now. Haven't decided whether they belong on the pantheon with Cake & Green Day yet. You can check out the music at http://www.weenradio.com/. Imagine that, a band letting people hear their music.

Sorpranos: Dr. Melfi shoudl have told Tony. The scene of Tony taking revenge would have been ultra-sweet.

Posted by michael at 09:37 AM
Desktop

For now you will have to enjoy my current desktop.

I just read that Apple's Mac OS X is being released with a few serious features missing.

Now remember, the Mac is touted as the platform for creative video development. Final Cut Pro and all that, ya know.

1) Has no DVD support at all. Can't read them or play them.
2) Has no support for analog video input. Unless it's on firewire, OS X won't work with video in
3) No new video card drivers until summer
4) The entire Adobe suite will run emulated and therefore slower than under OS 9.1

Supposedly, Apple is planning to release another version of OS X in the Summer called Puma that has these features.

So I ask the simple question, "Why release OS X now?"

Answer: Because Steve Jobs and Apple are greedy bastards that are trying to suck every last penny out the Mac Cultists to meet quarterly expectations.

Posted by michael at 01:08 PM
A new king arises

After getting a bit feed up with Napster, I d/l LimeWire. Sweeter than a box of Red Vines!

Gotta go, this is slowing down my connection. Limewire demands my bandwidth!

One more note. Kozmo has stopped renting games, they still rent movies and other stuff. This internet bubble bursting is starting to affect me now.