Cruftbox
My box of cruft
My Mom flames me

My Mom read this weblog for the first time today. She called me to tell me she emailed me a complaint.

How Dare You put your criticism of AOL in print!!!
Your Mom!

Heaven help me. A True Believer in the AOL/TimeWarner/Borg Collective in my own family.

Further good news from Mom is that my Dad read Lucas's reply about Macs and is now refusing to buy a PC. Me and my dumb ass weblog. More years of supporting damn Macs...

And finally, it's still pouring rain here in LA, so it looks like I won't be attending the XFL game for the second time in a row. Fuck me, I think I spun the karma wheel in the wrong direction.

In my last post, I posted about Macs. This leads inevitably to the Angry Mac User email.

Lucas of Dioxidized (Don't link if pictures of dead people turn your stomach), sent me this note.

you're doing it again, and i don't like it!

Needing to use outlook is one of the most cheesy reasons to need to switch to a PC. You can just buy outlook 8.2 for the Mac. Works fine.

You can even download the outlook 2001 beta for the Mac for free, works fine again. I know this because i'm the sole mac user at my workplace and i have no issues whatsoever with emails or file exchange (thanks to DAVE, a netbios program for macs). The only issue is ODBC access to MS-SQL Server 7.0 databases, thanks to microsoft not releasing drivers as they had for 6.5 and earlier...

So go, tell your dad before he buys a PC, to go to microsoft.com/mac/ and download the outlook client... works like a charm...

Really, if you ask me, unless you do database development, Win32 programing, or play games, there really isn't much difference between the capabilities of Mac's and PC's...

Let me leave my comments simply:

My father was one of the first people in line to buy the original Apple Macintosh. You know, the original 128K version.

For years, he has stuck by Apple, buying Mac after Mac. Resisting the Siren's Call of Windows, he sat upon the shrinking Mac Fortress with other fanatics, as he watched his sons eagerly embrace the dark side.

Today I recieved a phone call:

Me: Hello?
Dad: Hi, I'm in Costco. Can I ask you a question?
Me: Sure, what's up?
Dad: I'm looking at a HP Pavilions PC. I think I'm going to have to switch over to the dark side.
Me: You're switching to Windows?
Dad: Well, I'll have to hold my nose and use it because of Outlook.

We went on to discuss the fact that his office is all PC and that they want to get the Outlook/Exchange thing up and running. It's the right move, and he knows it. He doesn't like it, but he can read the writing on the wall.

Steve Jobs needs to be afraid, very afraid. When you start losing customers that have been buying your products for 15 years, you have some problems.

While the new Flower Power iMac may look purty, my Dad really doesn't give a fuck about cutsy, retro design scheme. What he cares about is a computer that works with the office. Apple can't supply that, so they lose yet another customer.

Posted by michael at 01:02 PM
The Planet Jupiter

Posted by michael at 07:48 PM
Almost as good

Almost as good as the All your base are belong to us link is this image. 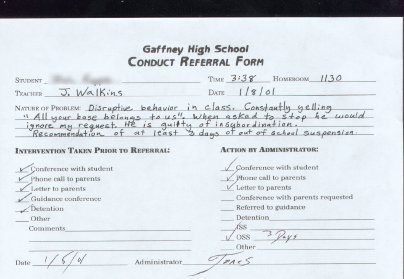 Posted by michael at 07:08 AM
All your base are belong to us

All your base are belong to us

Posted by michael at 10:03 PM
Saturday

Well, my wife bagged the XFL game due to the fact it was 'rainy and chilly".

We went to go see Snatch instead. It's a great movie. You should go see it now.

It's raining here in LA and I have about 20 hours to track down a Valentine's Day present for my wife. Any suggestions would be helpful.

Work is way too busy.

I went out last night to dinner, drank too much. Then like a college student, I went out to more bars and drank more.

I think I called my brother Matt late last night for some stupid reason. Sorry bro.

I don't feel so well.

I'm sitting in the lobby of the hotel with some crappy international muzak playing over and over. 5 minutes till we head out for more meetings. I'm so not ready to deal with people...

I can already hear James, Joe & Lucas laughing at my sorry ass.

Posted by michael at 07:57 AM
XFL: First Impressions

I watched the first game of the XFL on Tivo tonight. I had been at a movie with Michele and watched it after the fact. Gotta love Tivo.

My first impression is that it is fun. I think I'll enjoy my season tickets. Phew...

From the opening seconds when I saw pans of the crowd where many were holding a beer bottle in each fist, I knew I was going to like it. Instead of flipping a coin, a player from each team runs for the ball and whoever comes up with it gets to choose kick or receive. Suh-weet!

Yes, my nitpicky brother is right, the football skills leave something to be desired, but it's no worse than college ball.

I was surprised that at the end of the 3rd quarter between the NY Hitmen and the Las Vegas Outlaws, the broadcast switched to Orlando/Chicago game and stayed there. The Outlaws we killing the Hitmen and I doubted the hitmen would come back to win, but it was very strange to have the game you are watching disappear. I can olny assume that the XFL managment decided it was better to show the end of the high scoring Orlando/Chicago game than watch the Hitmen continue to get skunked.

The other thing to mention is the cheerleaders. I don't think I've seen so much silicon since my bachelor party. I predict a few hot selling Playboy issues starring the XFL cheerleaders.

I'm travelling on business this week to the frigid East this week. So my updating may not happen.

I don't know what amazes me more...
The brilliant person who thought this up?
The cashier that accepted it?
The police for tracking down this dangerous criminal?

What the hell happened to January?

If only I had a mental link to the net that let me post to Cruft while out and about this page would be full. Dimwits at the post office, our President-Thief, the importance of coffee, the go.com stuff. You'll have to wait a bit till my neural implant gets installed.

I got a package in the mail yesterday from Great Britain. There were a couple Sci-Fi books I wanted that are unavailable in the US. I went to amazon.com.uk and order a couple of books. My appetite for good sci-fi is voracious. I picked up Use of Weapons by Iain banks and Cosmonaut's Keep by [someone I forget]. I check out just like the US amazon, except it's in pounds not dollars. A week or two later a package arrive from the UK. Easy as that. If I wanted to buy them in the US I had to pay a crapload of money for them. Long live the ability to reach out across oceans from the comfort of my home.