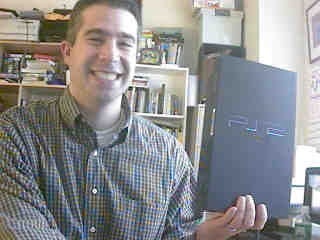 My brother with his new Playstation 2.

On Monday, my right hand guy at work, Joe, told me he was quitting. We've worked together for 5 years and done some remarkable things. We started as nobodys in the company and are now viewed as the leaders of change and innovation. He's taking a great position with better pay, title, and challenges, so I can't fault him for leaving. But the news left me feeling like I'd been kicked in the stomach. While change is good, change is hard. I'll someone new and move on, but things will never be the same as before. We still all eat lunch together, but something has changed already.

After about a week, I'm pulling out of my funk, paritally bouyed by my brother's success in buying a Playstation 2. They are going on ebay for over $700 easy. 10 hours outside to save $400 bucks? I'd do it.

Last night I released something into the Napster world. A favorite band of mine played live on the radio. I recorded it on my computer. I trimmed the WAV into four songs and converted it to MP3. I even added the ID3 tags so it looks nice in WinAmp. I dumped the files into my /Music folder, turned on Napster, and went to bed. This morning, I searched for them myself and found indeed, they had made it out into the world. I don't think of myself as a pirate. I consider readers here to be my friends and I just wanted to share the music I heard on the radio with you. (Think the RIAA will buy that?)

For your linking pleasure I present The Naked News, Don't read at work!, a raffle I want to win, my latest victory in UO, and the obligatory link to the disgusting pictures of dioxidized.com.

Have a good Friday.

Posted by michael at 08:18 AM
The airport now rocks

I am sitting at a terminal in the Cincinnati airport, surfing the web. This completely rules. T1 access. A private room. A phone. I want one of these business in every airport.

Eight days until the Playstation 2 is released. I do not have one on pre-order. I am so screwed.

I wrote up another adventure in Ultima. I really need to play Diablo 2 and finish it up. One of my buddies at work finished it last night and killed Diablo before me. I'm still fiddling about in Act 3 trying to find Kurast. It looks like SeaDogs and Age of Sail II are both coming out next week. So many games, so little time.

1) What is it with people at the post office? Why can't they show up prepared? For fucks sake, they wait in line for 15 minutes and then walk up to the counter and start asking about mailing things overnight. They get handed a form to fill out and then waste even more time. Why don't people have their shit together? Look, I can understand if you are buying a money order and once you get it you put into the preaddressed envelope, lick it shut and mail it right there. But what is up with people showing up with a children's toy and walking up to the counter looking for a box, tape, and scissors? And then the check writing. Who the hell writes checks at a store these days? Every bank in the country offers debit cards, yet I always see some numbskull writing a check eating up time from my life. Killing me in little bits as Henry Rollins would say.

2) Congress is trying to pass a law to force local libraries to install censorware on all their computers. I thought the uptight Republicans believed in 'local control'. Shouldn't it be up to my town to decide how we want to run our library? God damn election year politics is what it is! Fire them all. 435 chipmunks would do a better job than our current contribution sucking congress.

3) Peter Hamilton - This guy writes a good story, but he's dragging me into the 4th book of the series and still hasn't resolved anything. I get thought Reality Dysfunction: Emergence and Expansion and Neutronium Alchemist: Consolidation and still clean up to the bazillion plot threads going on. I need to order Conflict and be done with this series. Geez, I can't imagine what it would have been like to read the first book and then wait a couple years to read the next one. Fucking authors...

Posted by michael at 01:32 PM
Rejection

I stumbled across a good article on reverse engineering and submitted it. As usual, it was rejected.

But then the next day, some other guy gets the same story posted.

For those out of the know, TANJ = There Ain't No Justice

The people that host Cruft decided to reconfigure their server to disallow letting a CHMOD 777 cgi execute. I can under stand the security reason for this, but how about a little email stating the policy change.

This is a cool logo.

Of course KDE 2.0 is out at the end of this months. KDE roxxurs. Gnome suxxors. Mac OS X is fuxxored.

This logo is cool as well.

Second, with sixteen data points (Dots boxes) I have the new averages for the flavor distibution. Not surprisingly, Cherry still leads.

My alphabetical theory seems to fail since Strawberry is the #3 flavor. After a few more data points, I'll be ready to send my findings to Tootsie Roll for some answers.

Posted by michael at 03:51 PM
Last Page of the Internet

Someone mentioned that they hadn't been to last page of the internet. You can go there now.

OK, people are telling me to post on Cruft. We'll here you go, this will keep you busy.

As always, visit Lucas at dioxidized.com, he's usually bored and needs you to excite him with hits on his page.

In other news, I had sushi last night. That's my second time of eating sushi for those of you that are counting. I watched some guy on a date try to be macho and eat a bunch of wasabe. He almost blew his tounge out his nose he was coughing so hard.

I'm selling bunch more of my old junk on ebay. Slower than a garage sale, but it builds up my PayPal account. There are also some domain names going for sale cheap on ebay here and here. People will try to sell anything...